Gulmarg is a town, a hill station, a popular skiing destination and a notified area committee in the Baramulla district of the Indian state of Jammu and Kashmir. The town is situated in the Pir Panjal Range in the western Himalayas.

According to CNN, Gulmarg is the “heartland of winter sports in India” and was rated as Asia’s seventh best ski destination. The town is accessible from Srinagar by road via Tangmarg.

The road climbs uphill in the last 12 kilometres to Gulmarg passing through forests of pine and fir. Winter sports like skiing, tobogganing, snowboarding and heli-skiing take place on the slopes of Mount Apharwat reachable by a Gondola lift.

Maharani Temple (commonly known as Shiv Temple of Gulmarg) was built by a Hindu ruler Maharaja Hari singh for his wife Maharani Mohini Bai Sisodia who ruled till 1915. This temple was considered as the stately possession of Dogra Kings. The temple is dedicated to Shiva and Parvati. This temple is situated on a slight hill top with greenery. This temple is visible from all corners of Gulmarg. 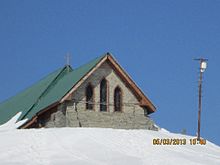 The Roman Catholic St Mary’s Church is located in the valley of Shepherds in Gulmarg. It was built in 1902, during the period of British rule, and was constructed in a British style. Made of grey brick with a green roof and decorated wooden interior walls, it has been described as a “Victorian architectural wonder”.In 1920 the church saw the wedding of the brother of Bruce Bairnsfather; Miss Eleanor Hardy Tipping married Capt. T. D. Bairnsfather, with newspapers describing the church as “very prettily decorated” and with the service conducted by Rev Canon Buckwell in the presence of both organ and a full choir.

St Mary’s was closed for years, but was renovated and reopened in 2003, holding its first Christmas service there for 14 years.[31] The church belongs to the Diocese of Amritsar, Church Of North India. 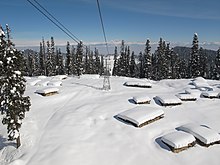