Nubra is a tri-armed valley located to the north east of Ladakh valley. Diskit the capital of Nubra is about 150 km north from Leh town, the capital of Ladakh district, India. Local scholars say that its original name was Ldumra.

Like the rest of the Tibetan Plateau, Nubra is a high altitude cold desert with rare precipitation and scant vegetation except along river beds. The villages are irrigated and fertile, producing wheat, barley, peas, mustard and a variety of fruits and nuts, including blood apples, walnuts, apricots and even a few almond trees. Most of the Nubra Valley is inhabited by Nubra dialect or Nubra Skat speakers. The majority are Buddhists. In the western or lowest altitude end of Nubra Valley near the Line of Control i.e. the Indo-Pak border, along the Shyok River, the inhabitants are Balti of Gilgit-Baltistan, who speak Balti, and are Shia and Sufia NurbakhshiaMuslims.

Siachen Glacier lies to the north of the valley. The Sasser Pass and the famous Karakoram Pass lie to the northwest of the valley and connect Nubra with Uyghur. Previously there was much trade passing through the area with western China’s Xinjiang and Central Asia. The people of Baltistan also used the Nubra valley for passage to Tibet. 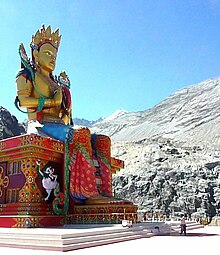 Diskit town in the valley have become the congregation centre for people of the region. Diskit is the headquarters of the Nubra Valley and thus has lot of government offices with basic facilities. It is also connected by road with Leh. The 32 metre Maitreya Buddha statue is the landmark of Nubra Valley and is maintained by the Diskit Monastery.

District: Leh
Did you know: The pass on the Ladakh range is north of Leh and is the gateway to the Shyok and Nubra valleys.